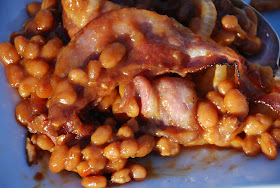 Just when I thought that two great baked bean recipes were enough, Saveur came along with this recipe that has a distinctive taste as Alabama native Sandy Ivey livens up her beans with juice from her "under the sink" homemade sweet pickles.

I was expecting a good recipe and little did I know I would be eating it out of the pan before it even hit the dinner table.

1⁄4 cup juice from a jar of sweet dill pickles

1. Preheat oven to 400°. Put the pork and beans, brown sugar, ketchup, mustard, molasses, and pickle juice into a large ovenproof pot or bean pot and stir well to combine.

2. Top the bean mixture with onion slices and lay the bacon over the top in a single layer. Bake, uncovered, until the bacon is crisp and the beans are hot and bubbling, about 1 hour. Remove from the oven and allow to cool slightly. Stir the onions and bacon into the beans before serving.
Susan York at 7:38 PM
Share
‹
›
Home
View web version