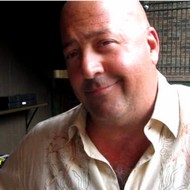 What’s so bizarre about hot dogs you ask?” It’s not about finding the nastiest food in Chicago but what appears ordinary to Chicagoans - like hot dogs with kelly green relish- might draw out distress signals from other parts of the globe.

As the Chicago Tribune put it:” finding grilled sparrows on the streets of Ho Chi Minh City is normal, but not on Maxwell Street.”
Bon Appetit!
Photo: The Stew
Susan York at 7:25 PM
Share
‹
›
Home
View web version