Where would I send Guy Fieri if Diners, Drive-ins and Dives came back to Chicago? Evanston is a good start and I was on a mission today to find all three. 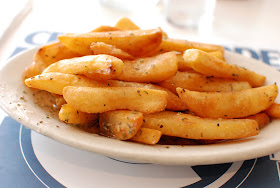 I have passed this Greek restaurant near Main Street for years and never considered going in…until yesterday.

Anyone who mentions French Fries has my immediate and undivided attention. When friends reported that the Lemon French Fries – or Greek as they are featured on the menu - were addictive, I had to find out for myself.

They were so remarkable in fact that I went home and immediately tried to duplicate the recipe.

DRAT! When I figure out the formula, you’ll be the first to know. From what I am told by the owners, people have been trying to get this down for years and nobody has got it perfect yet…except the family and they aren’t telling a soul.

These steak cut fries were topped with a mixture of lemon, oregano, white wine and spices and despite the wet dressing they were very crispy which is exactly how I like them.

My Greek hairdresser spent the better part of my morning appointment raving about their skirt steak. Since I’ve never had a skirt steaks better prepared by anyone other than the Mexicans I know and love, I’ll have to go back and give the greek-style preparation a try.

Stay tuned on this one. 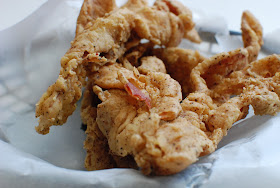 The Drive By: Weiner and Still Champion
Location: 802 Dempster Street, Evanston, IL
The Dish: Deep Fried Bacon – Or As They Call It In The South: Chicken Fried

Winner of the Best Taste in the Big Tex Choice Awards competition at the Texas State Fair in 2008, this recipe is loaded with saturated fat and was my first dish on the Diners, Drive In’s and Dives tour in Evanston. I was knocking on their door at 10:30 AM when they opened.

I was excited… they were surprised to see me so early.

The guys at work told me on Friday that this dish was to die for. No kidding…it will move you to the top of the heart transplant list before you can order your second round. I swear it clogged my coronary arteries just watching it come out of the deep fryer.

While critics of the dish condemn its harmful health effects, lovers of the food speak as fervently about its qualities as well. You be the judge. I delivered my opinion after just one bite because that’s all I could eat.

Just how many calories and fat are in Chicken Fried Bacon? You don’t even what to go there!

I’m a bacon purist and here is my take on this recipe: You can add bacon to any ingredients and it will taste great, but you can never add ingredients to bacon. It’s that simple!

So what is Chicken Fried Bacon anyway? Bacon seasoned, double-dipped in batter and breading, and then deep-fried.

I was so prepared to love this dish but found it to be like most of the other chicken fried recipes I’ve had before – overrated.

I will admit that it would have been much better if they had used thick cut bacon instead of the paper thin strips I found under the chicken fry.

Eat at your own risk and call me back when they decide that thick cuts bacon is the strategic element that is missing from this dish.

In a large bowl, whisk together the flour, baking powder, salt and pepper. Place half of this mixture in a large, flat baking dish.

Pour half of the buttermilk in a separate large baking dish.

Dip each bacon strip first in the buttermilk, then in the seasoned flour. Set the bacon aside on a rack for a few minutes to allow the flour to absorb some of the buttermilk to form a good coating. For an extra crispy coating, dredge the bacon once more in just the flour mixture.

Heat a good inch of vegetable oil in a large frying pan (or in a deep fryer) until a thermometer inserted reads 350 degrees.

Fry the bacon, a few strips at a time (you don't want to crowd the pan or fryer), until the strips are golden brown on both sides, about 2 minutes per side. Drain the bacon on a rack. Continue until all of the bacon is fried.

In a blender or a food processor, puree garlic with egg.

Mix oil with lemon juice in a pouring jar.

Add salt and pepper and whirl an additional 10 seconds.

Transfer to a bowl, cover, and refrigerate.

If the mixture separates or does not thicken, correct it as follows: Pour all but 1 tablespoon of separated mayonnaise into another container.

With motor running, add separated mayonnaise slowly; mixture should regain right consistency. It is best to prepare this the day before, to allow flavors to mingle and mellow out. 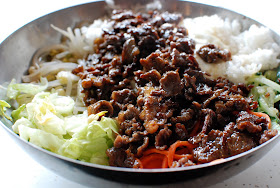 I stopped by this scarcely noticeable restaurant that I later learned is frequented by most of the Evanston police department (ask a policeman and he can tell you where to eat good food in the neighborhood) and everyone else who happens to love Korean food.

I refused a menu and was quickly brought an enormous bowl of BiBimBop that was so delicious I went home and made it up again.

This is the first BiBimBop recipe I ever made and it is an easy, delicious initial effort.

Mix all the ingredients and marinate the meat for at least an hour or two in the fridge.

Rice: Wash and cook 1 cup of short grain white rice according to instructions.

Bean sprouts: Blanch bean sprouts for 20 seconds. Drain, place in a dish and add 1/2 teaspoon sesame oil, dash of salt and sprinkle of sesame seeds. Mix and set aside.

Mix all sauce ingredients together.

Heat a cast iron skillet up on medium and add a tbsp of oil. Cook the marinated meat without moving it around too much on the pan (try to flip it only once).

When meat is cooked, portion rice out into two bowls. Top with meat and veggies.

Cook an egg over easy so the yolk is hot, but still runny. Add on top of rice, veggies, and meat.

I’ve tried a lot of BiBimBop recipes, many of them sent to me by Korean friends and appreciate all of them but none more than the one below. This recipe is simple and like anything, if you use fresh ingredients, you’ll never have a bad meal.

What is the most creative part of this recipe? Assembling the ingredients that will make it your own!

In a bowl, arrange meat and vegetables over steaming, hot rice. Top with egg of your choice. Drizzle with sauce, mix, and enjoy!

Note: Like all other recipes I make, use fresh and quality ingredients. The results are only as good as the ingredients!

Did you know a bowl of BiBimBop contains all the five major food groups? Eating just one bowl of Bibimbap, you take in carbohydrate (rice), protein (beef and egg), vitamins and minerals (various vegetables), and of course fat (Sesame oil).

Another Afterthought: Stephan told me today that the plum sauce changes the entire complexion of the recipe and that mama always brings it with the dish.

The AKA bad son who served me did not offer it so I have to go back and try it again. I thought that it was great without it but I guess that I’m in store for another bowl of heavenly bliss.