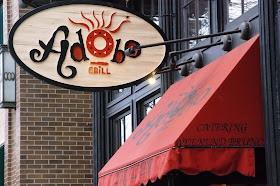 At 1610 N Wells, this place had mixed reviews on just about every site I checked out.
I decided to do this Cinco de Mayo location since we are fast approaching the date this Thursday and I didn’t have any other agenda in mind because I was still recovering from all the Royal wedding festivities last Friday.

I arrived at 11 AM – opening time for brunch on the weekend. I was the first one in the door and there was no rush to open. That’s OK. I am use to it because I lived in Mexico where manana is manana.

We finally got a sunny, beautiful day but they were not letting people eat outside so I happily sat at the table in the front window where I often try to sit to photograph food.

I ordered the Queso Fundido which I lived on when I was in Mexico. It was always one of the least expensive things on the menu and when you are a student you look for cheap. 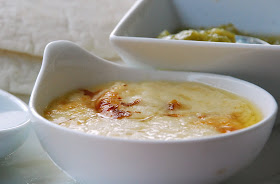 Good Queso Fundido is so easy. You just melt the cheese in the oven according to the instructions on the Supremo Queso Chihuahua, and serve with the hot fresh flour tortillas and homemade green chili sauce. Oh, and don’t forget the salt shaker.

Adobo’s Queso Fundido wasn’t melted in the middle so Plan B - smother it in green sauce.

My waiter finally went off to bring me a bowl when I started rattling off in Spanish that the Queso Fundido was very different from what I’ve had in the past. In fact, he looked rather amazed that I spoke Spanish at all.

At this point even the green sauce could not rescue this bowl of Queso Fundido because by now it was cold and I just didn’t have a taste for it anymore. 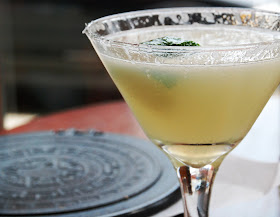 As an after-thought – I ordered a Margarita.