A Passion for Puffy Tacos 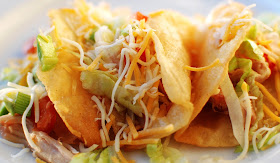 Puffy Tacos are a specialty on San Antonio’s menus.

Combine the masa mix, salt and warm water in a large bowl and mix until a smooth dough forms. Pull off pieces of dough and roll them into balls about the size of Ping-Pong ball.

Cut a quart-size re-sealable plastic bag open down both sides, to form a rectangle.

Drop a tortilla into the hot oil and, using a metal spatula; repeatedly douse the tortilla with the hot oil until it begins to puff up.

Flip it over and, using the spatula, make an indentation in the center of the tortilla to form a taco shape. Transfer to paper towels to drain. Repeat with the remaining tortillas.

Fill each taco with your favorite fillings.


This recipe is Saveur’s take on the puffy tacos that are served at Rolando’s Super Tacos in San Antonio. For over 24 years, this tiny place has cranked out some of the biggest and best Mexican bites. I ate there 16 years ago and the food continues to have a very enthusiastic following.


Changes: I didn’t mash the avocado but diced it instead. I also made a miniature version to serve as an appetizer rather than an entrée.

Pour oil to a depth of 2″ in a 6-qt. Dutch oven and heat over medium-high heat until a deep-fry thermometer reads 375°. Stir together masa, butter, and 214 cups warm water in a bowl until dough forms; divide dough into 12 pieces and shape each piece into a ball. Using a tortilla press or rolling pin, flatten each ball into a 6½″ disk. Place 1 disk in oil. When it begins to puff, press the end of a metal spatula into the middle of the tortilla so that tortilla bends into a taco shape; hold spatula within tortilla until taco is golden brown and crisp, about 1½ minutes. Transfer taco to paper towels to drain; repeat with remaining tortillas. Divide chicken and guacamole among tacos; top with lettuce, tomato, and cheese. 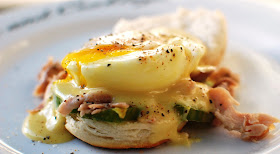 Afterthought: With the leftover chicken, I made Eggs Benedict for breakfast the next morning. So good with the biscuits and a beautiful green heirloom tomato I was surprised to find at the Fresh market yesterday.
Susan York at 5:54 AM
Share
‹
›
Home
View web version