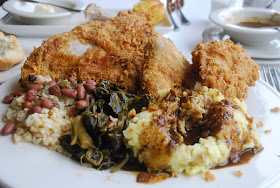 If you’re craving your grandmother’s fried chicken like I was this week, Big Jones, a magnificent Southern restaurant in Andersonville is the place to head.

Big Jones serves what they call A SOULFUL FRIED CHICKEN DINNER and soulful it is because it changed how I think about cooking chicken. I will never fry it again without using leaf lard and ham.

So here were the rounds and all for $16 at lunch:

Biscuits and Cornbread… Of course the essentials for any Southern meal.

Fried Chicken... Cooked according to Edna Lewis's recipe in fresh leaf lard with butter and a ham hock, in a cast iron kettle. Leaf fat, the football-size cape of dry, crumbly fat that surrounds the pig's kidney, contains the fewest impurities and thus makes the best lard for baking and frying.

Mashed Potatoes and Gumbo Gravy – The pork gravy on the mashed potatoes was simply the best gravy I’ve ever had. This is going to take me awhile to figure it out and it may require several return trips to Big Jones to do that.

Thoroughly rinse all the greens, since they are grown in sandy soil and tend to be gritty. Separate the leaves, remove the large center stem, and discard the bottom portion that is lighter in color. Cut the upper part of the greens into large pieces.
In a 10-quart saucepot, sauté bacon over medium heat until brown. Into bacon drippings, add onion, celery, bell pepper, garlic, cayenne peppers and tasso. Sauté approximately 5 minutes or until vegetables are wilted. Add greens and blend well into mixture. Continue to sauté until the greens are wilted. Add cider vinegar and chicken stock, 1 cup at a time, to maintain moisture.
Reduce heat to simmer; cover and cook, stirring occasionally, for approximately 45 minutes. Season to taste using salt and pepper and continue cooking until the greens are well-smothered.

This dish will seem over-cooked by most standards; however, this is the method preferred by both Cajuns and Creoles. The green jus is called "pot liquor" and should be eaten with corn bread. Serve as a vegetable or side.

Red Beans & Rice...my favorite recipe is still from the Delta Café in Tulsa:

Cover the soaked beans with water. Add vegetables and spices. Bring to a boil and cook 5 minutes. Turn the stove down to simmer, cover the pan and cook 2 ½ hours.

Take the meat out. Discard rind and bones. Shred and put back in the pan.

Serve with rice. Season with salt and pepper, a little splash of cider vinegar and a drizzle of olive oil.

Banana Pudding...I LOVE banana pudding. I love it however without the coconut but I did love the bottom crust.

Here is the chicken recipe adapted from Edna Lewis. It may taste good at home but I can’t imagine that it will taste any better than it did at Big Jones today. They definitely have the process down to a science.

Drain the brined chicken. Rinse the bowl and return the chicken to bowl.

Pour the buttermilk over the chicken. Cover and refrigerate 12 hours.

Drain chicken and toss out the buttermilk. Place on a rack.

Put lard, butter, and ham with hock into a cast iron frying pan. Cook over low heat for 30 - 40 minutes until the butter does not give off any foam and the ham is browned.

Remove the ham from the fat and heat the fat to 335°F. I use an electric frypan for this so my fat temperature is perfect.

Blend together flour, cornstarch, salt, and pepper in a bowl.

Dredge chicken in the flour mixture and then shake to remove the excess flour.

Put chicken skin side down in the heated fat. Fry in batches.

Cook 10 minutes on each side until the chicken is beautifully browned and cooked through.

Drain again on a wire rack and serve.