Soups and other One Pot Dishes are my mainstay in the winter and here are some great recipes to start you off… even though it was October 25th and 79 degrees today.

I literally live on them when it gets cold and it’s easy to make on Sunday and freeze for lunch the remainder of the week.

Many of these look more complicated than they actually are. Use patience through the process. 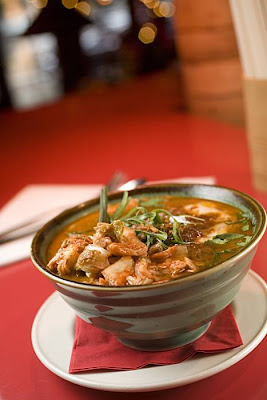 Udon With Braised Pork, Greens, Kimchi and A Poached Egg

2. Bring a large pot of salted water to a boil over high heat. Add the noodles and cook according to package directions. Drain and rinse with cold water. The dish may be prepared up to this point several hours ahead.

4. Add the cooked noodles and bean sprouts to the broth and simmer briefly to reheat the noodles. With tongs and a wire-mesh skimmer or slotted spoon, divide the noodles, sprouts and pork between the 2 warm bowls.

5. Adjust the heat so the broth barely bubbles. Working with 1 egg at a time, break the egg into a custard cup, then slip the egg into the broth. Repeat with the second egg. Poach eggs until whites are firm, then transfer 1 egg to each bowl with a slotted spoon. Divide the broth between the bowls, then top each serving with half of the watercress, kimchi, scallions and fried shallots. Serve immediately.

The balance of these recipes and photos are from Martha Stewart Living. I tried each one of them and, true to Martha Stewart, they were excellent.

salt and pepper to taste

Heat the oil in a pan.

Add the sausage and cook until no longer pink and set aside.

Heat the oil in the same pan.

Add the onion and saute until tender, about 5-7 minutes.

Add the garlic and red chili pepper flakes and saute for another minute.

Add the sausage, stock, beans, oregano, and bay leaf and simmer for 20 minutes.

Add the spinach and simmer until it wilts.

Add the lemon juice and remove from heat.

This was an easy Chicken Gumbo. Not as rich as some of the gumbos I have made but a great flavor for a quick and easy base. 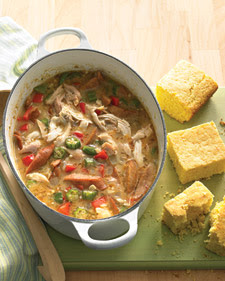 • 3 tablespoons vegetable oil, such as safflower

In a 5-quart Dutch oven or heavy-bottomed pot, heat oil over medium. Add flour, and cook, whisking constantly, until pale golden, 5 to 7 minutes. Stir in bell peppers, onion, garlic, and oregano; season with salt and pepper. Cook, stirring occasionally, until vegetables are crisp-tender, 10 to 12 minutes.

Add 4 cups water; stir in okra and sausage. Bring to a boil. Stir in shredded chicken, and warm through, 1 to 2 minutes. Season with salt and pepper; if desired, serve with cornbread. 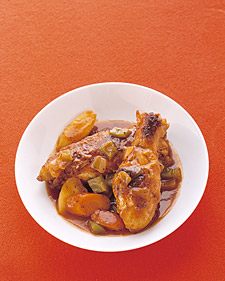 Sprinkle chicken pieces with 1/2 teaspoon salt and 1/4 teaspoon pepper. In a Dutch oven, heat oil over medium heat. When it's hot, add chicken pieces, and brown well, turning them occasionally, about 15 minutes (if necessary, cook chicken in two batches to avoid crowding the pan). Transfer to a plate.

Drain most of the fat from the pan. Add onions, half the bell peppers, 1 tablespoon parsley, bay leaves, thyme, and oregano. Cook until onions are translucent, about 5 minutes. Add wine, and scrape up browned bits from the bottom of the pan with a wooden spoon.

Stir in tomato sauce. Return chicken to the pan, along with any accumulated juices, and add parsnips, carrots, and remaining bell peppers. Add enough water to barely cover; bring to a boil. Reduce heat, partially cover the pan, and simmer until chicken is almost cooked through, about 15 minutes. Uncover pan, and continue simmering until chicken is done and the liquid thickens slightly, 10 to 15 minutes. Stir in remaining 2 tablespoons parsley, and serve. 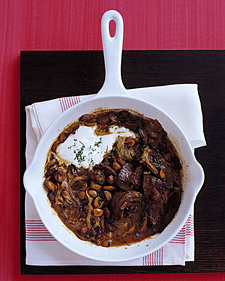 Slice beef into 2-inch-long strips, each about 1 inch wide and 1/4 inch thick. Season generously with salt and pepper. Heat 2 tablespoons oil in a large skillet over high heat. Brown meat in two batches, about 1 minute per side; remove from skillet, and set aside.

Stir mustard into mushroom mixture in skillet. Return beef to skillet; cook over medium-low heat until heated through, 1 to 2 minutes. Remove from heat, and stir in sour cream. Season with salt and pepper, as desired. Serve immediately, garnished with chopped dill.
Susan York at 6:33 PM
Share
‹
›
Home
View web version