A Batch of Fresh Tortillas… 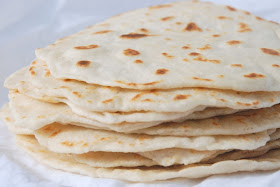 After experimenting in my kitchen for weeks, I feel fairly comfortable with the process of making homemade flour tortillas. In fact, I think that I have mastered them.

It wasn’t hard. You need a good recipe (I looked at a lot of them) and a bit of patience while rolling them out paper-thin. It’s an exacting process but well worth it when you taste one that comes hot off the comal.

Getting them round is not so tricky once you figure out that the dough should be rolled from the center to the edges and rotated slightly after each roll. Once you get the process down and the dough has rested, you can make them fairly quickly.

Don’t let anyone tell you that you don’t have to use lard when making tortillas. It’s the difference between a good tortilla and a great one. The lard was the most important ingredient and for anyone who tells you that vegetable shortening or oil will yield the same results hasn’t actually tasted one made with lard. There is a world of difference. 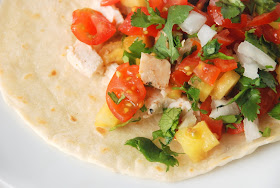 I used a tortilla with a little leftover chicken for lunch today. Again, the secret is to use a little bit of meat and a lot of fresh vegetables and fruit. It’s a pretty healthy lunch.

The Green Tomatillo sauce below is an amazing addition. I thought that it had a little too much cilantro when I first made it but the taste was fabulous on a quesadilla.

My favorite restaurant near the University of Guadalajara use to spread Chihuahua cheese on a pizza pan, popped it under the broiler until bubbly and brown and served it as a make-your-own with a basket of hot flour tortillas, a bowl of green tomatillo sauce and a shaker of salt. 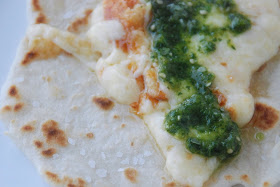 Simple but the most delicious Quesadilla ever and I simply can’t eat them any other way.

Safe to say that I will never buy flour tortillas again.

Next round: Mole, a sauce that is so difficult it will take months if not years to master.

I have so many friends who learned the art of mole from their mother and grandmothers. Recipes and techniques passed down for generations and once again, I suspect that it’s going to take a brilliant recipe to master this.

Rick Bayless once said that it took him over 20 years to get his black mole sauce right. Bayless' version is made up of 26 ingredients while many others have more than 30 of very complex flavors.
Shopping to cook a mole will be an adventure all its own.
Stay tuned for the fun and Bon Appetit!

Combine the flour, baking powder and salt in a large bowl. Stir together until mixed.

Pour in the hot water very slowly, stirring to bring together.

Knead dough approximately 40 times until it becomes a solid ball of dough and is not so sticky.

Cover with a towel and rest for at least an hour.

Roll into the size of golf balls. Place on a tray and cover with a towel. Let sit 30 minutes.

Heat a dark or cast iron grill to medium-high heat.

One by one, roll balls out until paper- thin.  The trick is to roll out the dough from the center to the edges, rotating the dough slightly after each roll. It takes a little practice but you will quickly get the technique down.

Cook on each side for 30 seconds and remove while the tortillas are still soft but have slightly brown spots. You can tell when to flip them as you can see the air bubbles forming.

Remove and stack tortillas. Cover with a towel to keep warm.

To warm, wrap in foil and warm in the oven. Do not use a microwave as it changes the consistency of the tortilla.

8 Oz. Tomatillos
2 Jalapeños
2 Cups Cilantro, chopped
1 tsp. sugar
2 whole garlic, chopped
Place 8 oz. tomatillos and 2 jalapeños in a 4-qt. saucepan, and cover with water by 1".
Bring to a boil over high heat; cook until slightly soft, about 5 minutes.
Drain vegetables, and set aside to cool to room temperature.
Place in a food processor along with 2 cups cilantro, 1 tsp. sugar, and 2 whole garlic, and pulse until finely chopped but not puréed. 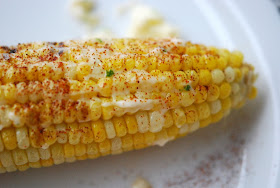 I also made traditional Mexican corn. Since it was raining today, I used my microwave to cook the corn (easy) and finished them off on my indoor grill.

Although the first recipe is a little healthier, I liked the more authentic recipe with the cotija  cheese.

Precook in microwave 6 minutes in a plastic bag with a little water.

Turn grill on medium. I use my electric indoor grill. Grill corn and jalapenos until charred.

Cover with the butter mixture.

Sprinkle with pepper and paprika.

Serve with slices of jalapeno on top.

Preheat an outdoor grill for medium-high heat.
Grill corn until hot and lightly charred all over, 7 to 10 minutes, depending on the temperature of the grill.
Roll the ears in melted butter, then spread evenly with mayonnaise.

Sprinkle with cotija cheese and serve with a lime wedge.